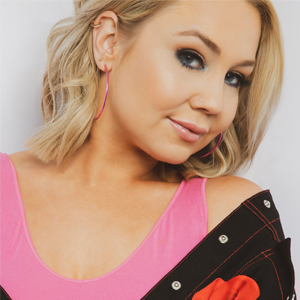 Ever since she came careening into Nashville in 2014, singer-songwriter RaeLynn has been someone who is the “talk of the town” for her refusal to color within the lines and play it safe. Within minutes of meeting the Texas native, it’s obvious you’re in the presence of a woman who is thoroughly comfortable being 100 percent herself. Talking a mile a minute, telling stories in her rich twang, RaeLynn manages to be frank, funny, and feisty, while also thoughtful and emotionally connected both in conversation and in her music.

And while she has enjoyed incredible success — a debut album, WildHorse, that bowed at No. 1 on Billboard’s Country Albums chart, two ACM New Female Vocalist nominations, a PLATINUM-certified single (“God Made Girls”), GOLD-certified single (“Love Triangle”), nearly 415 million total career streams, and the first Country face to represent the global beauty brand Too Faced — RaeLynn has felt like something has been missing from the way she has been seen by the public. Though she co-wrote 11 of the 12 songs on WildHorse, those songs were penned when she was 17 and 18. “My songwriting has changed, and my life has changed” she says. “I want to be able to show a more quirky, fun side of my personality. The things I say are kind of left-of-center. How can I put that into a song and make music that finds its own box within Country music? With these new songs, I feel like the person you meet in the room is being reflected in the music as well. I’m more confident in the woman I am now more than ever before, and I’m saying what I really want to say. I cannot wipe the smile from my face because I know the fans are going to love it.”

RaeLynn’s upcoming new EP, Keep Up, sounds like her freedom ride. The songs brim with personality and humor, starting with her latest release “Bra Off.” “Breaking up with you was like taking my bra off,” she sings, “feeling free and loose like this T-shirt I got on,” before hilariously comparing casting off an ex to shedding a “pink, lacy, suffocating” bra. RaeLynn knew while writing the song with Josh Kerr and Emily Weisband that it was special. “This is what girls want to hear,” she says. “As a girl, this is what I want to hear. I grew up in a small town of Baytown, Texas. And I’ve always said, ‘If it ain’t Baytown, I don’t want to cut it.’ It has to have that Baytown flavor. I grew up a church kid, but I like to cuss, too. And I want all those flavors in the music because that is me, and it’s my fans, too. The ones who send me messages about a scripture I post on my Instagram are the same fans who crack up at me twerking in a post the next day.”

RaeLynn’s vivid songwriting is on full display on each song on Keep Up, where she sketches spirited characters like the girl at the center of “Judgin’ to Jesus”: “If you keep a Bible by your cigarettes / If you go to church in a cheetah dress / If you dance a little dirty / If your funk’s a little flirty / Don’t worry, honey, around here we leave the judgin’ to Jesus

“That song is like my life statement,” RaeLynn says. “I am the kind of girl who’d walk into church in a tight cheetah dress and a big coat. I like to dance, but I also love the Bible. Being a person like that, I want to hear songs like this.” It’s the kind of big-hearted, RaeLynn signature song that gives people the permission to be themselves.

The lightheartedness continues on “Whatever Gets You There,” where RaeLynn dispatches an irritating suitor with the following order: “Go drink it, smoke it, poke it, bro / Whatever, I don’t care / Whatever gets you there / Out of my life, out of my hair.” “The vibe is, ‘Whatever the hell you need to do to get over us, please do it,’” RaeLynn says chuckling. “People write a lot of really sad songs about breakups, but nobody ever wants to admit that some dudes are annoying, okay? At first, I was like, ‘Can we say, ‘Poke it’? Then I thought, ‘Hell, yeah, we can say that,’ because why not? and that is so freeing.”

RaeLynn named the EP Keep Up because “this is a new chapter, and all you peeps better just keep up on this train,” she says with a laugh. The song itself is a love letter to the Country girls. “I can party just as much as any other dude, and I felt we needed a song to say that,” she says. “Yes, I rock Gucci sometimes, and yes, I drink pink drinks, and yes, I’m girly as hell, but that doesn’t mean I can’t drive a truck. That doesn’t mean I can’t change a tire. That doesn’t mean that I can’t do whatever the guys can do. And that’s the vibe that I wanted for this song.”

To create a dynamic sound that matched the energy of the lyrics, RaeLynn turned to producer Corey Crowder (Chris Young). “I wanted the sound to really reflect my personality,” she says. “Where I grew up, I didn’t just listen to Country music. I listened to Pop. I listened to R&B. I listened to Rap. I listened to so many different things and I wanted it to really show that. It’s Country, but mixed with a Pop kind of low-end that brings so much fullness. I told Corey I wanted it to be like Dolly Parton with some 808s and he made it come to life. I wanted something that makes me dance, that makes me feel good. I want to bring the fun. And he just got it.”

RaeLynn’s exuberant attitude is partially due to the fresh start she got when she signed a record deal with Florida Georgia Line’s newly launched label, Round Here Records. (She was already signed to their publishing company Tree Vibez Music.) She has been reinvigorated by the encouragement she has received from FGL’s Tyler Hubbard and Brian Kelley. “They’ve given me free rein to be an artist,” she says. “They didn’t put me in a box and tell me what to do. There’s no drama when it comes to picking the songs because they know what it’s like to fight for what they want on their own records. They know what it’s like to fight for their creativity, so they said, ‘You should go with your gut. We want you to find the joy in what you do.’ And they’ve built so many amazing relationships in this town and are breaking the mold by doing something different. People want to support that. I can’t imagine two better guys being at the front of my ship than them.”