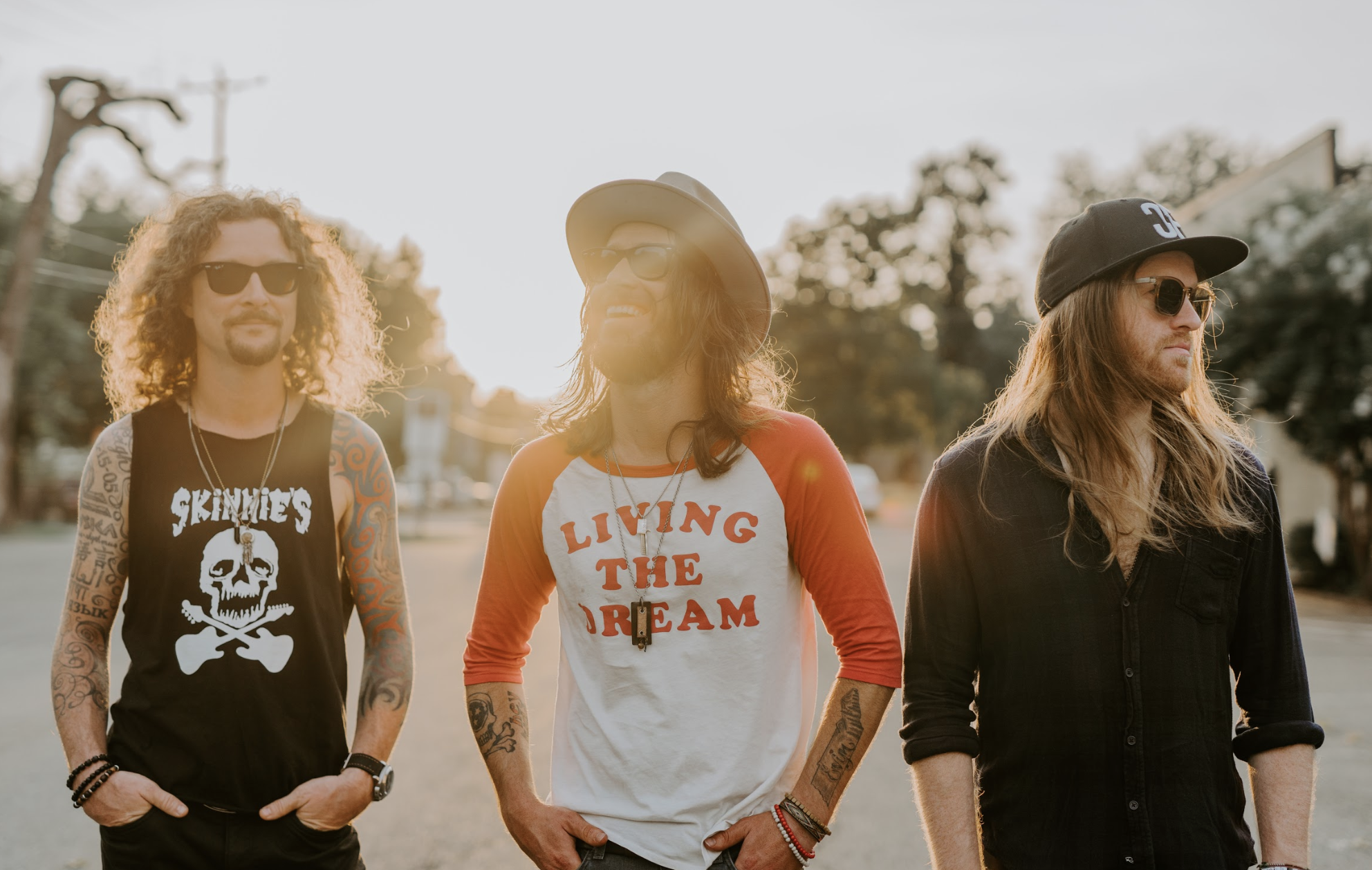 It may be a ballsy move for The Cadillac Three to name their new album LEGACY, but if any country band has the shared history to lay claim to such a weighty title, it's the longhaired trio of Nashville natives. Singer-guitarist Jaren Johnston, drummer Neil Mason and lap-steel player Kelby Ray have known one another since they were teens and have been sharing stages together for nearly 15 years. This summer, they'll headline their hometown's most famous venue, the Ryman Auditorium, just a few blocks from where Johnston and Ray sat in high-school math class daydreaming about one day playing the legendary hall. Johnston's connection to the Ryman goes back even further: his father has been a drummer at the Grand Ole Opry since Jaren was a child. And now he has a son of his own, who, like his old man, will be well-versed in all the sounds that make up both Music City and The Cadillac Three, from country and blues to rock & roll. So, yeah, "legacy" looks good on this band.

"We're trying to build something and do it our way, which is always harder," says Johnston. "If you're going to leave something that people are actually going to remember, you can't take the easy way. So we took all of our history, mixed it with the energy of The Cadillac Three and put it into a record that makes sense of where we've been and where we're going."After nearly a full year on the road in support of 2016's BURY ME IN MY BOOTS, their first full-length album recorded for Big Machine Records, the group returns with a more mature perspective. Johnston, Mason and Ray have experienced a lot on tour, whether opening arenas across the country on Florida Georgia Line's Dig Your Roots Tour or headlining their own consistently sold-out string of sweaty club and theater shows in the U.K. and Europe. As they prepare to head back in November for another big run, for The Cadillac Three, the old saying really is true: this band is huge overseas.

"Europe showed us that we should bet on ourselves. It was a big gamble the first time we went over there," says Mason, "but the shows and the fans have continued to grow." "And going overseas reinforced that we wanted to get more music out more quickly," adds Ray. "They go through singles really quickly over there. They want more, more, more and that encouraged us to go into the studio, knock this album out and keep going." All that travel, from city to state, country to continent, could decimate a lesser band, but it only served to creatively inspire the mighty TC3. They wrote many of the 11 songs that make up LEGACY on the road, cut the tracks on rare days off in Nashville and then recorded all of Johnston's vocals – one of the most "country" voices in the genre – in the back lounge of their bus in between shows, adding a crackling sense of vitality to LEGACY. They also produced the album themselves.

"We knew what we wanted to do with this record. Instead of putting it together in bits and pieces, we started with a batch of songs and then picked a single," Johnston says. "That's how this shit should be done." That back-to-basics approach to making music yielded the band's most infectious single to date: the woozy sing-along "Dang If We Didn't." Written, as is most of the album, by Johnston and Mason (here, with Jonathan Singleton; other times with songwriters like Laura Veltz and Angelo Petraglia), "Dang If We Didn't" teases fans with its ambiguous title, before revealing what the guys actually did in the chorus: get drunk last night.

"When you're a songwriter, you can be critical of song titles," says Johnston. "But with 'Dang If We Didn't,' I thought it was a little bit mysterious. It makes you wonder, 'Dang if we didn't do what?'" "Eat pizza last night," quips Mason. "It could be anything." "American Slang" rivals "Dang If We Didn't" in its grandeur. It's a huge song, akin to Tom Petty's "Free Fallin'" or The Cadillac Three's own "Graffiti," off BURY ME IN MY BOOTS. Lori McKenna (Little Big Town's "Girl Crush")began writing the tune with the intention of having The Cadillac Three finish it. "We are vampires on Hollywood Boulevard / angels and sinners of our hometown streets," go the lyrics, painting a picture of life's rebels, before a massive country-radio chorus kicks in: "We are the back roads, dirty water shore banks...we are born and raised on American slang."

The constant throughout LEGACY, however, lies in the players: as on all three of The Cadillac Three's albums, only Johnston, Mason and Ray are the musicians. There's no guest keyboard player, no second percussionist and certainly no bassist. Ray holds down the low end on his lap steel. Especially on the standout LEGACY track "Take Me to the Bottom," which features Johnston reaching high for a breathtaking falsetto. "'Take Me to the Bottom' has the best bass sound of anything I've ever done," says Ray, who also keeps things greasy on the intense "Tennessee." A thrashing love song, it evokes the stomp of ZZ Top– a favorite of TC3 – and features a lyrical shout-out to progressive country hero Sturgill Simpson, a kindred spirit of the band.

No matter the influence, though, the trio stays faithful to their own unique sound throughout LEGACY. "Hank & Jesus" glides along with Tennessee twang; "Demolition Man" is distinguished by the space between the notes; and the swaggering "Cadillacin'" is a band anthem. "We don't put anything on our albums that we can't re-create live," says Mason. "If there is a TC3 rule, it's that: keep it honest."

Honesty, or authenticity, is a favorite buzzword around Nashville. But few artists come to it as naturally as The Cadillac Three. These guys couldn't fake it if they tried. In the album's title track, they offer a heart-on-the-sleeve testimony to what's really important at the end of one's days: love and a family tree. When Mason and Ray heard "Legacy," co-written by Johnston, they flipped, and pushed for it to be the title of the record. "We're far enough along in our careers where doing an album called LEGACY doesn't feel presumptuous to me," says Mason. Not when you run through The Cadillac Three's milestones. It's all there, from boundary-pushing albums, Grammy-nominated No. 1 songwriting across genres and fan-favorite singles to sold-out club shows and massive festival gigs alongside Aerosmith.

"With this album, we're continuing to build this thing we've created. We're touring nonstop, headlining shows in the U.K., playing the Ryman, and putting out a new record," says Johnston. "Shit, that's a pretty good legacy so far."